The indication of ability levels by using adjectives is time honored but somewhat problematic. It was introduced by David Wechsler (Wechsler, 1958) and has been replicated in each of the examiner’s manuals for the various Wechsler scales in succeeding years.

What is always mentioned by Dr. Wechsler and his colleagues and successors in the examiner’s manuals is that (and this is always bolded), specific scores should always take into consideration the measurement error inherent in test scores (Wechsler, 1997) (p.25). Thus, the use of the term “average” with regard to the Wechsler scales describes performance that is plus or minus two-thirds of a standard deviation from the median.

This does not square with statistical terminology, in which “average” is usually referred to as plus or minus one standard deviation, connoting the average range. The qualitative descriptions proposed by various authors (click on thumbnail below to download or open PDF): 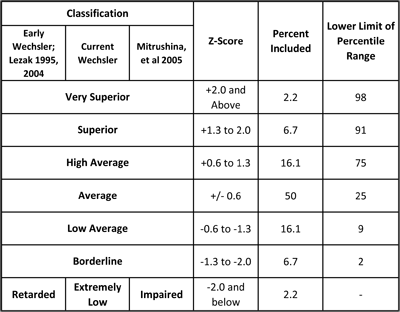 Beginning with the Wechsler Adult Intelligence Scale—Revised, Wechsler substituted “Extremely Low” for “mentally retarded” because this “avoids the implication that a very low IQ score is sufficient evidence for the classification of ‘mental retardation’…” (Wechsler, 1981). Neuropsychologists continue to use “retarded” (Lezak, 1995; Lezak, Howieson, & Loring, 2004), although “Impaired” is gaining acceptance (Mitrushina, Boone, Razani, & D’Elia, 2005).

In my own practice, I avoid using adjectives, preferring to use percentile rankings. This is especially important with a person who was high functioning before the onset of their disease or injury. Such a person may actually have a rating that is considered “impaired” if their score on the instrument is in the average range. Additionally, my examinations focus on functional limitations, so that using the word “impaired” suggests that I am actually focused on impairment, which is lower on the Stage Model.

About the Author: Len Matheson